With you
against Lyme

If you have heard about Lyme Disease and are worried about it. If you don’t find the support, we offer you in SOS LYME: a meeting place with information to better know this pathology and where it will help you to face the disease.

Lyme disease is a bacterial infection principally caused by Borrelia burgdorferi and other bacterias, viruses, or parasites that we denote coinfections. It can affect several or even all the organs and tissues. Especially the locomotor and nervous systems. That is the reason why it is known as Multi-systemic multi-infection. The disease is contracted by the tick bite, flea, louse, bed bug, mosquito bite if they are infected. The symptoms can appear immediately after weeks, months, or years.

The problems that people suffering from this disease have to do with:

A wrong, incomplete, or missing diagnosis, that ignores the Lyme and therefore leads to ineffective and contraindicated treatment.

The doctor's incomprehension and even the patient's environment in front of symptoms evolving and severely limit their lives.

The imitative Lyme character hides behind the appearance of other diseases: autoimmune, degenerative, psychiatric... 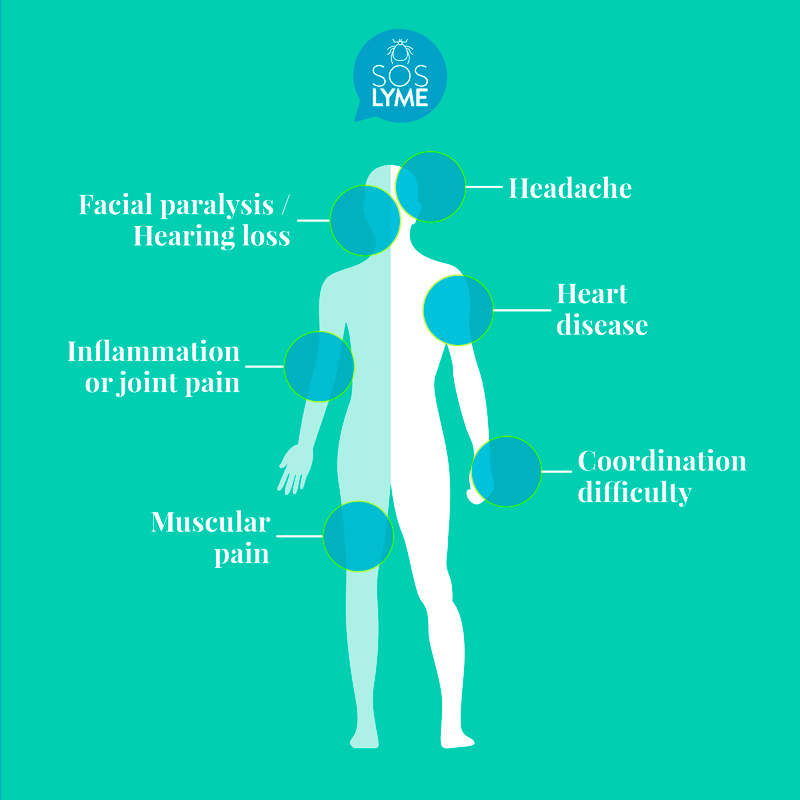 The diagnosis problems are due to the symptoms that the sick person has, characteristic of other diseases such as:

How to end Lyme?

Lyme disease can be presented in different phases. Early Lyme is easy to treat with antibiotics. If you suffer from chronic Lyme you need a treatment combining several antibiotics, stimulating the immune system, and eliminating the neurotoxins that the Borrelia is producing. It is needed a doctor specialized in Lyme with years of experience and the correct hospital and medical equipment.

1. How do you get Lyme disease?

Lyme disease is contracted by the bacteria Borrelia burgdorferi, which is transmitted by the tick bite. The major transmitters of the bacteria are nymphs, the most little ones. If they are attached to the skin they can infect you in hours.

2. Do all the ticks transmit Lyme disease?

No. The only ticks that transmit this disease are those infected by the bacteria borrelia. 50% of the tick they are. The most common in Spain is the lxodes ricinus.

3. How do I know that I have a borrelia infection?

The most visible infection symptom is migrans erythema, a reddish stain that appears around the bite. However, many times this stain does not disappear or goes unnoticed. If you have a fever, other undefined infection symptoms, and you have been in a risk situation for the last weeks in contact with animals or fresh air in locations with tall grass.

4. Who can get Lyme disease?

Lyme disease can affect people of all ages. People who use fresh air with grass and forest have a major risk of contracting it because they are more exposed to ticks. The probabilities of being bitten by a tick are bigger in year seasons where ticks are more active.

5. What consists of Lyme disease treatment

As it is a bacterial infection, the antibiotic treatment is the most indicated but insufficient. Generally, combining several at the same time. They also have to be complemented with other treatments that activate the patient’s immune system and help eliminate the progressive toxicity created by Borrelia. It is essential to realise a detailed treatment according to the infections that the patient has. It is always complex and expensive, so go to specialized centers.

If you detect a tick attached to your skin, you have to remove it as soon as possible. Use special hangers, not with tweezers or fingers, nor throwing oil, alcohol, or gasoline. You have to hold it in the nearest part of the skin and pull it firmly upside. Do not use another method to remove it and go to the doctor after achieving it.

The antibiotic is administered if there is any suspicion. To tackle the consequences of an infection. Even before obtaining the analysis results that determine if you have a borrelia infection.

It is easy to diagnose Lyme disease in the early stage when the symptoms appear within a distance of weeks or even months or years. The common infection diagnosis tests are negative in 80% of the cases. At the beginning of the diagnosis, it must be clinical, and very specialized tests are required which need a lot of experience by the doctors. These tests are done in very specialised laboratories, especially in the United States.

The ILADS is an international organisation that works on the investigation and training of professionals. You can find a specialist in your web, following this link https://www.ilads.org/patient-care/provider-search/

In some countries, there are supposedly platforms of sick people with Lyme which are financed by unethical laboratories directing the patients to doctors who work with them. The most advisable way is to contact people that have been cured of Lyme and tell you who cured them. Unfortunately, many patients have been in treatment for years with little improvements who think they can’t be cured assuming it is normal. Although, there are not many cured patients that keep active in forums, associations, or diverse platforms. They recover their life and turn the page. That’s why cured patients show their testimonies to guide others that try to overcome the disease.

You can be infected by Lyme disease by the bloodstream. Like hepatitis. The contact via is more commonly demonstrated by the tick, mosquito, or other insect bites which are infected by the Borrelia burgdorferi bacteria with or without an accompanying entourage (coinfections).

Not all ticks are infected by the bacterias which provoke Lyme disease. Ticks can get infected if they eat from infected animals. The disease can be transmitted when an infected tick bites a person and remains to it during a time. In most cases, the tick must remain for 26 hours or more time so that the bacteria passes through, but there are cases where there has been a contagion in less than 24 hours. Lyme disease is not transmitted from person to person, except by the bloodstream.

Some of the coinfections can be caught by dogs, like the Ehrlichia, that dogs frequently have in the saliva.

10. Why doctors that have visited me haven't talked about Lyme?

Early Lyme (acute) is easily recognizable by any doctor, especially those who work in the mountains. However, chronic Lyme is unknown. In Medicine studies are not explained, not even in training programs of Infectious Specialists, Internal Medicine, Rheumatology, or any specialty. A Lyme expert has to educate by itself, by assisting to specialized courses in the United States and Germany mainly, so it is crucial to have good knowledge in languages, at least in English.

Help us
against Lyme